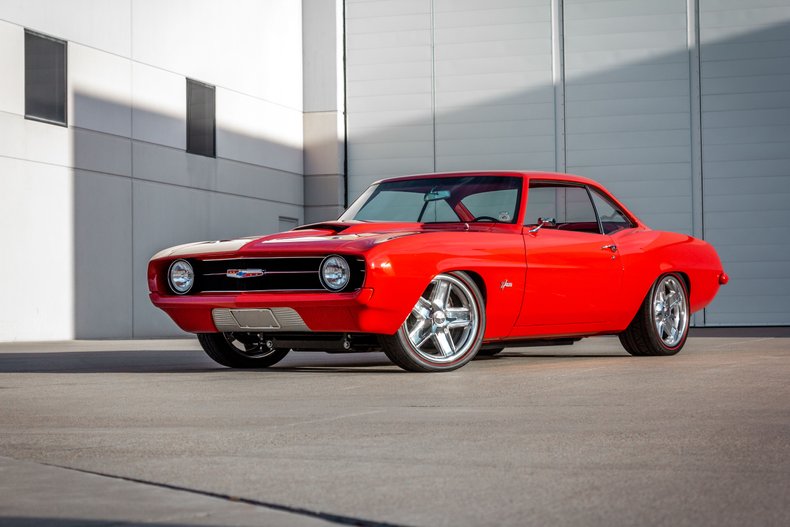 This vehicle is #001 of our Platinum Marketing Listings, reserved for only the most elite collector cars!

Visit www.CamaroZ409.com for a complete presentation of this amazing car!

In 2009, a rendering was created in the September issue of HOT ROD by artist Steve Stanford. This Camaro concept drew inspiration from Chevrolets greatest. A '61 "Bubble Top" Impala, '62 Impala SS409, '57 Bel AIr, "65 Corvair, '67 Corvette and '66 Corvette. Captivated by the rendering this car was born after a '69 Camaro purchase on Ebay!

In 2017, nearly 7 years, over 5,000 man hours and over $500,000 later, this one of a kind custom concept was brought to life!. Debuted at the 2017 Grand National Roadster Show. The “Z/409” is a multiple award-winner with appearances at the Grand National Roadster Show, Sacramento Autorama and Portland Roadster show. It also has been featured in numerous publications, including the cover of Hot Rod magazine.

Inspiration for custom builds can come from a variety of places. Some people want to build the dream car from their youth, others want to incorporate the latest technology in a classic body, but this 1969 Camaro draws its inspiration from a rather unique perspective: What if Chevrolet had debuted the Camaro 10 years earlier?

Starting with a rendering from automotive, artist Steve Stanford, the concept was to build a 1969 Camaro with the styling cues of a 1961 “bubble top” Impala. The most obvious trademark feature to incorporate would be the roof line, for which the rear third of a 1965 Corvair roof was incorporated and massaged seamlessly into the car. Numerous other body modifications were completed, such as recessed waterfalls cut into the decklid to accommodate 1961 Chevy emblems, flush-mount rear taillights, redesigned front and rear valence panels with recessed aluminum ribbed plates and integrated rocker moldings.

To create the unique flush-mounted rear glass, a custom mold was sent to Finland, where the new rear window was made. For the wheels, a one-off set of 5-pin aluminum knockoff-style with custom adapter plates were made using original Corvette knockoff wheels and factory stainless center caps. The theme of the build didn't stop at the exterior. A 1961 Chevrolet dashboard was crafted to fit in the interior, complete with an original 1961 steering wheel, SS 409 Sun Tach and factory-style air-conditioning ducts. The bucket seats are upholstered with 1961-spec Seville Grain Red Vinyl with matching headliner. A 409 4-speed shifter arm was adapted to the Turbo 400 transmission, surrounded by a resized chrome shifter console. Custom door panels, quarter-panels and a rear package tray helped complete the interior.

Once the design for the interior and exterior were established, there was only one engine befitting a car like this: a dual-quad 409 with the classic “Camel Hump” heads. Starting with a 1962 SS 409 block, it was bored and stroked to 472ci and utilized original-spec Carter Carburetors and a 1962 date-coded aluminum intake. Once built, the engine was good for 498 horsepower with 466 ft/lbs of torque, all backed by a Turbo 400 and Ford 9-inch rear end. Despite its classic inspiration and design, several modern components have been added for it to drive like a true performance car. 4-wheel Wilwood disc brakes were added, along with a complete Heidts subframe and 4-link, with everything tied together by a set of subframe connectors. A thunderbird steering rack was added, along with mini tubs in the rear. Additionally, for comfort, a top-of-the-line stereo system, tilt steering column and air conditioning were added.

With over 5,000 hours in the build, the “Z/409” is a multiple award-winner with appearances at the Grand National Roadster Show, Sacramento Autorama and Portland Roadster show. It has been featured in numerous publications, including the cover of Hot Rod magazine. This unique Camaro defines the term “one-of-a-kind” with a retro take on a classic platform.

This is one extremely unique and truly one of a kind car. It is unlike any custom '69 Camaro out there. With its mix of styling cues from some of the most popular Chevy's ever built from the '50's & '60's, makes this look like a true GM prototype. An absolute must own for any Chevrolet enthusiast or collector.

​The quality of the build on this Camaro is absolutely spectacular. There was absolutely no expense spared when this work of art was being built. The 7 years, 5,000 hours and $500,000 truly shows in the exquisite quality of every aspect of this build. The craftsman involved in the creation of this car were true artists in their craft. You only see quality like this on less then 1% of all the customs and restorations in the world.

This is a true number 1 show car that is not only built for show but is fully function-able. It is one of the tightest most well built customs we have ever had the pleasure of driving. The car is extremely well sorted out as everything works and operates impressively. From the A/C blowing ice cold to every function on the car working. The paint, body work, fit and finish is second to none, spectacular.

If you have any additional questions please call us at 480-281-2059. We can help with shipping quotes and arrangements. I also welcome all International buyers. The car is located in beautiful sunny Scottsdale, AZ.